The Koryo Studio has made it its mission to distribute art from and about North Korea on its platform. As the only institution in the West, the company around Nick Bonner has managed to establish official relations with the legendary “Mansudae Studio” and to exhibit and sell works by North Korean artists.

I am very pleased that my Massgames images are now also being distributed via this platform. For our collaboration, I have selected a series of 5 motifs that are only available in this version exclusively through Koryo Studio.

You can find more about it here.

For those who want to learn more about art in North Korea, I have put together a small article here: 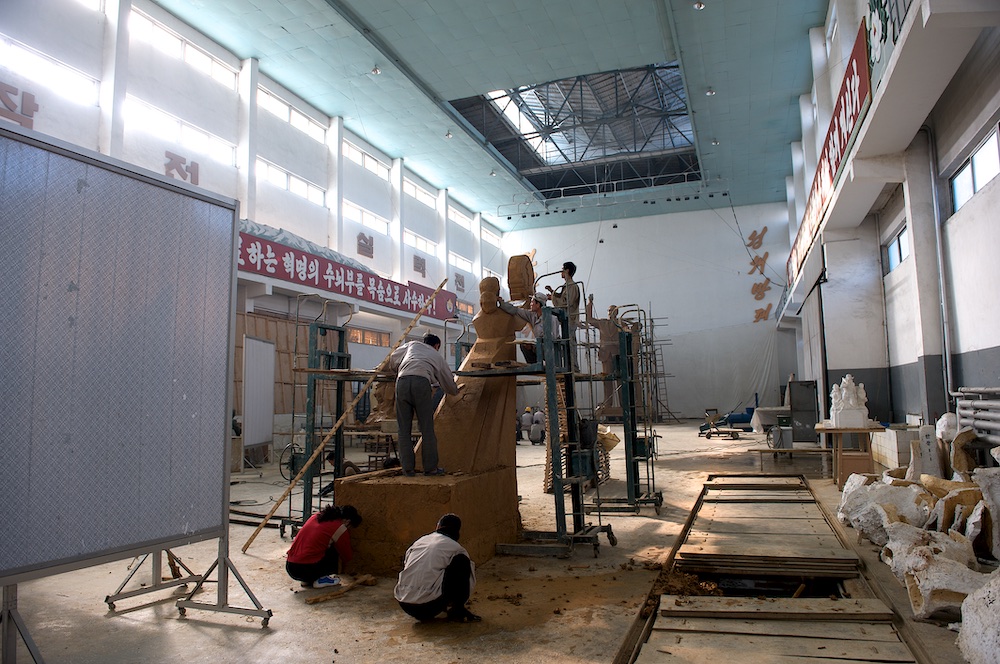 The large workshop of the Mansudae Art Studio 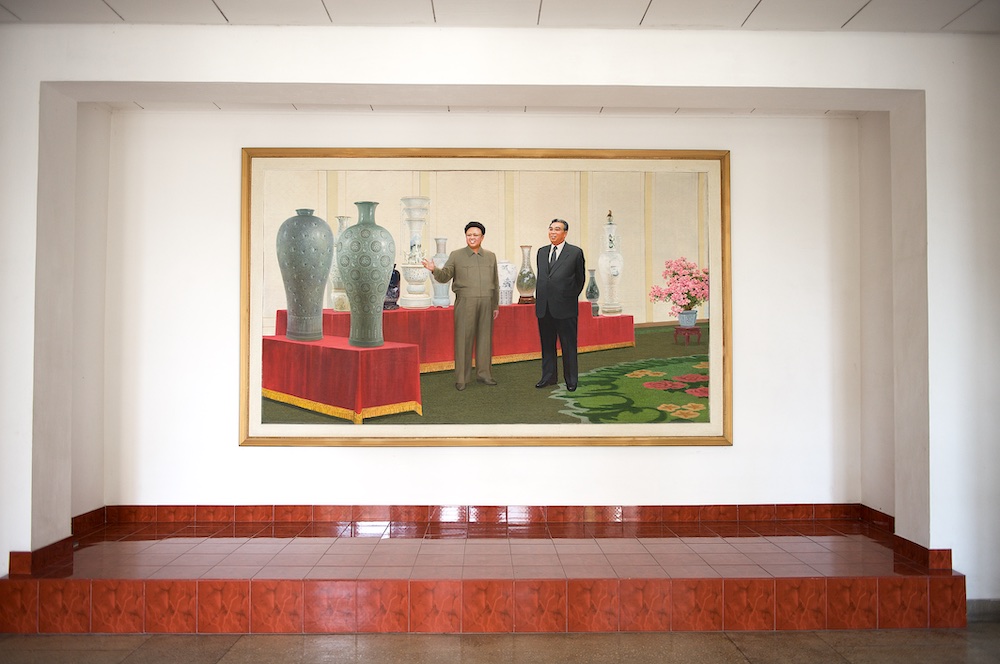 One of North Korea’s few export hits is – in addition to a car named “Peace”, which is manufactured on behalf of South Korea, and a well-running arsenal of short- and medium-range missiles, which regularly threaten South Korea – art.

In North Korea, the word “art” is usually used for the monotony of “socialist realism” which is omnipresent here. In the entrance halls of the public buildings, the bank displays huge wall paintings of the two “great leaders” Kim Il-sung and Kim Jong-il. Most of the time they look weighty into the distance or are busy with something that has to do with the public building, e.g. supervising the construction of the subway or visiting an agricultural collective farm. Most of all, the huge and numerous bronze statues of the great leaders that adorn all significant plazas and are spread in an unbelievable mass over the whole country attract attention. At the time of my first visit, the largest of these statues was the over 20-metre-high Mansu Hill Grand Monument, which Kim Il Sung waves over Pyongyang with a sweeping gesture. The statue stands in front of a huge museum, which “protects” it to the back and is flanked by equally huge stone flags. Those who want to visit it first have to climb an enormous staircase and are accompanied during their whole visit by solemnly blaring marching music that resounds from hidden loudspeaker systems. A really impressive production. Man feels dwarfish here.

Even more impressive than the statue itself, however, is the reconstruction of the system after the death of Kim Jong-il. On this occasion, the original statue was simply moved a little bit to the left and a second statue of Kim Jong-il was added. And North Korea wouldn’t be North Korea if it had been left alone. No, in the first version of the statue of Kim Jong-il his typical jacket was wrong. He wore a thin trench coat which remotely resembled a work coat. Of course, this wasn’t allowed to happen, so they melted it down again and replaced it with a new one, this time with a solid, thick winter jacket, which is slightly inflated by the wind, so that despite its thickness it now looks a lot more dynamic.

All this work is carried out by the Mansudae Art Studio in Pyongyang and behind its enormous walls, all kinds of amazing secrets are hidden. During my last visit to North Korea, I was finally able to visit the studio myself and was amazed: in a large hall, the dimensions of which were more reminiscent of a factory hall than an art studio, a huge colossal statue was being created, but not by one of the two Kims – but for an African ruler, obviously a commissioned work. Stylistically, however, one remained true to oneself in the socialist pomp and pathos, after all, one has a reputation to lose. In the studios that were shown to me, however, in addition to the expected pottery and classical Korean ink painting, I found, to my greatest surprise, impressionist pictures of such beauty and lightness that it took my breath away. I was not told for whom these pictures were painted, I just knew that no North Korean would ever see them. After all, a few years earlier I had had the dubious pleasure of being shown through the State Art Gallery, where exactly one type of painting was exhibited: Kim Il-sung in Socialist Realism. Sometimes with a far-reaching view over the beautiful landscapes of North Korea, sometimes with tractor drivers or peasant girls, alternatively writing, reading, governing, but always in the middle of the picture and always half a head taller than those around. They were always clean, powerful, cheerful and optimistically gathered around their great leader. Not a single abstract picture hung in the entire museum, as if art history had simply stopped at some point in the middle of the 19th century and not the French Impressionists, but Adolf Menzel had conquered the world with his painting. The museum director smilingly dashed off my question as to why no abstract painting was being exhibited with the remark “North Korean people don’t like abstract art” – and that’s why the artists wouldn’t produce any. Whether the “North Korean people” were asked, however, remains doubtful. And now I stood here in this small studio in front of a young artist who didn’t speak a word of English and instead produced the most beautiful paintings I had seen in a long time. One can only hope that one day a light breeze will blow through these studios and that a few sheets of his art production will blow into the West.